We are up at 4:45 A.M. to get over to the airport. Kate is looking a little confused as she is normally just going to bed at this ungodly hour. We booked our flight tickets on-line with Expedia and opted for an American airline flight. When I say opted that is we went for the cheapest flight we could get. Qantas was also an option for the time and date we wanted to leave but it was dearer. Wendy had wanted to go with Qantas as she has joined their frequent flyer club. The good news is American airlines and Qantas have a network agreement so the points will be collected.

We for some reason have an express check-in and we fly through the check in process. Well we nearly flew through the check-in process. Ignoring all the signs posted throughout the terminal and not hearing security staff reminding people to take all water bottles out of their land luggage before scanning Kate decided to see if she could fool the scanner. We had to wait for her to go through the scanning process all again. I sort of figured she would have known the drill as she is always watching Border Security on T.V.
We had a short stop-over in Sydney before boarding our 10:30 flight to L.A. I assured Wendy we will be flying American airlines only to discover we were on another Qantas flight as affiliates of American airlines.

Real smooth flight and the food is pretty good and there is lots of it. I must be getting used to the long haul as it seemed to go quicker than I remembered. Wendy and Kate are playing the women’s lib card because our Captain for the flight is female. When we touched down in L.A. 6:15 A.M. I was reminded by them that she did a good job of the landing. I casually remarked that she will most likely need to get a guy to park the plane. Imagine my smug surprise when she announced that they will be getting help to park at the terminal as it is a very tight space. Yep a guy pulled us into our spot!

Bit of a line (as usual) to get through border control and customs but really not to bad. Kate thought we were over the worst of the lines but I had to remind her that we now needed to go through domestic check-in and if me memory was correct then this can take a longer time than the International arrival checks. L.A. has (and is) still going through major re-development and the domestic check-in is not as harrowing as I remembered. We waited for one of two staff to check our passports. Kate and I went through at the same time. I had a very surly Latino type and Kate a very cheery lady. The Latino I think was surly as he would have preferred that he was checking in Kate.She does have on a tight tshirt after all. I could have been the reincarnation of Bin Laden for all he knew as he did not take his eyes off Kate. One more scan and we are through. Another security guy told Kate she looks like the Princess from the movie Frozen. I told him I was her Dad and he said that then made me the king!

I am sure as tired as hell now. We have another 5 hour flight ahead of us to reach New York. Surely we are flying domestically with American. Surprised again as we boarded another Qantas plane.

We finally landed in New York at 5:15 P.M. There is a shuttle bus but after such a long journey I told the girls that we are getting a cab. I have budgeted about $80 for the trip to lower Manhatten. We lined up for the cab and I noticed after we got moving that the meter was not ticking over. It was set at $52.80 as a locked in travel price. Pretty slow going on the freeway. It is peak hour so that was expected. I had mentioned to Kate the New York taxi
drivers have a fierce reputation of scaring the bejesus out of their passengers. Once we got up to maximum speed it soon became apparent that New Yorker’s drive like they are in a Nascar car race. Any spot that becomes available should be ducked into with no need to indicate. Once we reached Manhatten we had to take a number of detours with many of the major roads being blocked off. I read in the paper the next day that there had been a major gas explosion in the area known as the lower east garden (not all that far from our apartment). Three buildings had been destroyed which included a few celebrities apartments. The taxi driver is doing his best to get some sort of a route to our apartment by completing some marvellous last minute decisions. I feel like I am in a Seinfeld episode. Our taxi driver was friendly but was talking on his phone most of the way. One hand driving! At one stage we mad an incredible wheel spinning move to a new lane. I looked across the seat to see Wendy and Kate grab hands instinctively in a hail Mary moment. We finally made the apartment an hour and a half after leaving the airport!

Erica the owner of the apartment (we booked through air ‘n’ b) had sent Wendy an email to say she would still be at work when we arrived. She had left keys with security at the front desk. We have a single room in the apartment and are free to use the lounge and kitchen area. Our balcony looks out over the river to the skyline of Brooklyn at it is spectacular.
Once showered we were just to tired to go out for food and ordered in some Chinese. Now Jimmy McFarlane you always tell me that my blogs are more like a food eating safari. So I am not going to tell you what I ate!
Sleep came pretty easy.
Oh I had Egg Foh Young for dinner! 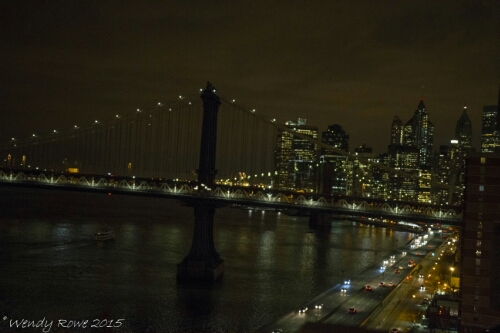 10 thoughts on “Melbourne to New York – Day One”

What day is it?