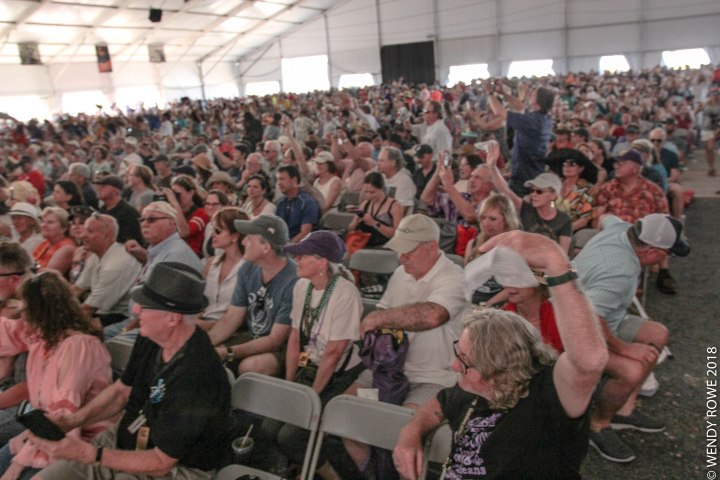 It is going to be warmer today than yesterday. The temperature (around 29C) is bearable as there is no humidity which is always the draining factor for me.

As soon as we got inside the Festival I got me a Crawfish and Sausage Po-Boy. That will keep me going for a while. Next to the WWOZ hospitality tent for fresh fruit and an iced coffee. We caught up with the WOW crew also enjoying some fruit. Went and said hello to Jeff and he gave me a Bobby Rush t-shirt.

We all then went to the Blues tent for Eddie Cotton. WOW. Eddie was tremendous, he sure knows how to put on a show and engage the audience. https://www.allmusic.com/artist/eddie-cotton-mn0001547922/biography

Next, we went over to the Acura Stage for a Fats Domino tribute. Fats passed in October 2017 and was, of course, a New Orleanian all throughout his life.  He was a major influence on so many rock stars that followed him. His back catalogue of music is extensive and unique. We had to sit in the bleachers way up back as the grassed area is packed. The sound is still good back here and there are large screens scattered around the site. The band on stage consists of many originals from Fat’s Big Band. The first guest singer was Deacon John followed by singer/pianist Davell Crawford. Then came Irma Thomas, Jon Cleary and Bonnie Rait, Jon Batiste and lastly Lil’ Fats Jackson. Each guest sang a couple of songs and every song chosen was a hit. The crowd danced and sang, and it was a fitting way to respect the music legacy of Fats Domino. As an aside, I should mention that Dr John is not on the bill at Jazz Fest. He has not played live since before Christmas. His health is not good, and I have been told by a local that Dr John has said himself that he is in a transition period which is very sad. We stuck in for the full hour plus of the tribute even though the heat was sapping out in the open. It was worth it.

Next back under the Grandstand for a breather. We have an Artist Pass from Jeff. He said to come back to the Green Room (which is the Jockey’s Room as after all this is a Race Track). I got to meet Stanton More and Joe Krown two of New Orleans finest musicians.

We must go back out into the sun again to see John Sansone on the Gentilly Stage with the Voices of the Wetlands. It is totally surreal to see him up there and to think it was only a few short months ago that he played at WOW. Here he is in a band of New Orleans Super Stars in front of thousands. It is a strange world. We had a quick word to Johnny after the set and he told that he will be at the Bombay Club in the Quarter around 8:30 playing in a trio.

Cara and Wendy have gone off to see Rod Stewart at the Acura Stage. No way am I going to see Rod who I think has morphed into Barry Manilow. I loved him when he was with the Faces

I went to the smaller Fais Do Do Stage to see The Last Bandolero’s. They were the band that backed Sting yesterday. All young guys from San Antonio. Another great find for me loved them. So enthusiastic and playing Texas alt Country Rock with harmonies that to me sounded like the Beatles. I must buy a C.D. Also hope they are playing somewhere in San Antonio when we get there early next month. http://www.thelastbandoleros.com/

I saw a guy wearing a Southern Cross t-shirt and he was an Aussie from the Sunshine Coast and he stopped for a chat.

The Fabulous Thunderbirds with Kim Wilson are closing out the Blues Stage and I waited over there to meet up with the girls. Glad I got to hear a few of the Thunderbirds classics. I have seen them a few times before. This festival I have vowed to myself to try and see as many different bands as I can.

I have been vindicated, the girls said that Rod Stewart was crap.

I don’t normally go out on a Jazz Fest night, just too damn tired. But the Bombay Club is only a short walk from our apartment. We found the club without any worries. It is upmarket with a more dressed up type of clientele. We found a spot at the bar and settled in for the show. Most of the crowd were there for the famous cocktails offered by the Bombay Club. That is until a steady stream of Aussies started to arrive, all to listen to Johnny. In the end, there must have been a dozen of us enjoying the show. We got talking to Wes who was in for a Medical Convention. He is a Neuro Surgeon, real nice man, he shouted us a few drinks. He sure liked his red wine. The Aussies are up dancing and Johnny seemed to like our presence as we were there for him. Finished up to be a great day/night of music.

Check out the décor of the Bombay Club and its history https://bombayclubneworleans.com/

What day is it?